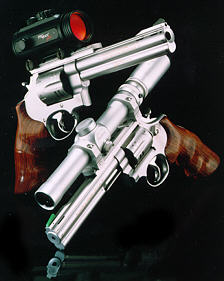 The Mag-na-port concept, so far as inventor-developer Larry Kelly is concerned, was born of necessity.

Kelly, a handgun hunter since the late '50s, found the punishment meted out by his .44 Ruger Blackhawk was detracting from the fun of shooting, and the extreme muzzle lift was adversely affecting the accuracy and speed of a second shot.

By 1965, the concept of trapezoidal ports cut into the muzzle by Electrical Discharge Machining procedures, had evolved. The theory was based on Kelly's years of EDM experience in general, and work done on fuel control valves for spacecraft on the Apollo project.

In 1969 Apollo EDM was formed, but only a small part of the new company's business was gun related. After a slow beginning, Kelly's efforts were finally recognized by the firearms press, and by 1973 demand for Mag-na-porting seemed to warrant a fulltime effort.

In 1974, after a year in Fraser, Michigan where Kelly operated the Mag-na-port shop as part of a small retail store, the Company moved to Mount Clemens. Since then, the Company has ported tens of thousands of firearms, ranging from .22LR target pistols to .460 Weatherby Magnums.

Mag-na-porting is accomplished with Electrical Discharge Machining (EDM), a surgically precise method of removing metal. Dielectric oil is flooded over the area of the barrel that is to be "cut," and an electrode. When voltage is applied, the oil is ionized, which establishes a continuous flow of electrons between the electrodes and the barrel...an electrical arc. It is the electron flow which does actual "machining" of the trapezoidal ports.

The patented Mag-na-port process assures the gun owner of a smooth incision of exact dimension. There is no damage to the metal surrounding the ports; no machining marks, as would be the case subsequent to a drilling operation. The finish is similarly protected, as it is blended into the metal exposed by the erosion process during the EDM operation.